Interview with Paul Howey from The Laurel of Asheville

Here is the full text from an interview I gave to the Paul Howey of Laurel of Asheville Magazine.  The magazine has published a much abridged version.

Where did you grow up?


To what (whom) do you attribute your artistic interests?


This isn't the answer to your question, but the first artist I fell in love with was Joseph Beuys.


Everyone is an artist whether they like it or not.

Who introduced you to the medium?


I have had dozens of incredible teachers and mentors, some of them quite famous, others not at all.  From my high school teacher, Todd Clercx, I learned about just diving into art without worrying.  From my first pottery teacher, Kevin Flicker, I began to understand standards of craftsmanship and a considered, holistic approach that continues to influence my work.  From my main teacher, Jeff Shapiro, to whom I was apprenticed for two years, I learned how everything fits together.  From my Japanese teacher, Living National Treasure, Isezaki Jun, I learned about the power of slowness and lightness of tradition.

How did you know this would become your medium of choice?


I made a lot of paintings in high school and my first few years of college.  Initially I was really snobby about clay work and was convinced it was a much lower form of art.  Then I took a glass blowing class and fell in love with that material in a way that I never had with paint and canvas.  But when I learned how much gas we used in a week of blowing, I just couldn't wrap my head around that number.  So then I started thinking about clay as a kind of alternative material to glass.  Also, the idea of a potters life really appealed to me.  At the time, making a living from selling small functional things seemed much more feasible than trying to sell large paintings.  At the moment I don't make too many small things and very few functional pieces, but that was what I thought at the time.  And all of this was before I ever touched clay, so I got into the idea of working with clay, before I ever actually did it.
But then I touched the clay.  From here its a story lots of people can tell.  Clay is just such an amazing material and you can work it so many ways; additive and subtractive processes work equally well, it is both demanding and forgiving, it can be softer than water and as hard as stone, as delicate as an eggshell and more durable than anything else humans have ever made, it changes from second to second as you work with it which creates a feedback loop or a dialog.  For me, the material itself is endlessly fascinating

Can you provide a bit more information about your Thailand experience?


I went to Thailand primarily to teach english, but once I was there I started volunteering at Ragamangala University, which is an interesting cross between an art school and a technical college.  By the second semester they asked if I would teach a sculpture course.  It was a little tricky since few students spoke english and my thai was pretty bad.  But the fact that it was challenging just meant I had to give more in other ways and really stretch out to give the students a valuable experience.  I think this made it fresh and exciting for them as well as me.  And in the end they made some great work.


I spent 6 months in Japan as a short term apprentice to Living National Treasure, Isezaki Jun.  My american teacher, Jeff Shapiro, introduced me to Mr. Isezaki and facilitated that connection.  I also received a grant Asian Cultural Council which made the experience possible financially.  My time in Japan gave me a number of important things.  While I don't make Japanese work, I do use some Japanese firing techniques and my time there gave me a deeper insight into these.  It also gave me a fuller understanding of some of my artistic roots.  My teacher spent about 10 years living, learning and working in Japan and so I feel that my time in Japan helped me understand my american apprenticeship better.  I think it was really good that I went to Japan after working on my own for two years as well.  The experience of going from a full time artist back to an apprentice felt like I was more prepared to draw more out of the experience.  One of the most important things I think I got out of the experience was to see how slow, considered action can be much more powerful and efficient than strength and speed.

When you graduated from UM in 2002, what did you have in mind for yourself as a career? Were you set on art at that time?  If not, when did that “transformation” come about?


I've heard many times that a person can't make a career out of art.  My attitude since I first touched clay was that because I know that some people do in fact make a living from their art, I don't see any reason that I can't. From there it is a matter of figuring out how to do it.  In my opinion, being an artist and making a living from your art are two entirely separate things.  I know several amazing artists that make very little money and I have also seen terrible work created by artists making several hundred thousand dollars a year.  I like making a living from my work because it gives me more time to make more work.  With respect to making a living from my work I use a sort of backwards formula:  I have found that the most effective way for me to make salable work is to not make anything with the intent of making it salable.  I am grateful to have found out early that the work that people respond to and buy is the work that I make purely because I want to make it.

Who introduced you to wood-fired kilns? When was that? Describe, if you would, your attraction to that method?


Honestly the first thing that really attracted me to wood kilns was the sound.  Depending on the burner design, gas kilns can sometimes sound like a jet engine.  Once while firing a very loud gas kiln in college I walked over to where some others were firing the wood kiln.  The only sound was a soft but powerful drawing sound from the entry and exit flues, though their kiln was just as hot as mine.  Since then I have come to find the effects from certain styles of wood kilns to be uniquely appropriate for my current work.  The process is also interesting and rewarding.  To fire successfully its not a matter of jamming wood in a hole.  I think of my relationship with the kiln like I think of my relationship with the clay.

What brought you to Western North Carolina and when?


Honestly I came to Asheville for the first time to visit a girl.  That part didn't exactly work out like I thought, but once I had spent some time in Asheville, I was hooked.  One of the times I was visiting Asheville I was walking through the Riverarts District, which as a bit grittier then, thinking that this would be a great place for a clay studio.  Just as I was thinking that I walked past the Clayspace Co-op and stuck my head in.  Josh Copus, the founder, was there and we hit it off immediately.  We've been a pretty tight team ever since.

Without divulging proprietary information, would you describe your creative process? From conception through creation to completion?


I have no proprietary information.  I'll tell anybody anything they want to know about anything I do.  Knowledge functions best in the public domain.

My work tends to evolve out of itself rather than from a specific concept.  Mostly I just make things that I am curious to see, but the interaction of pieces with each other is very important to me.  I often think of my work as one huge installation that is made slowly over time rather than a series of autonomous pieces.

Tell me about your role as curator for Serendipity: Wood-fired Ceramics exhibition at Crimson Laurel Gallery?


Curating the Serendipity exhibition has been an really interesting experience.  My idea was to put together an exhibition that explored a broad range of sculptural wood fired work.  But I didn't want to just put together a survey show or a show of my friends or a show of big names.  The wood fired surface, in all of its permutations, when married to sculptural forms has such enormous potential to be emotive and visceral.  My goal was to explore the breadth and depth of   that marriage.  On one level I hoped to do the same thing with this show that I try do with my own exhibitions which is to produce a show which exists beyond the individual pieces in it.  In this show there are figures, vessels and abstract sculpture but to me it all triangulates into a coherent, holistic exhibition.  In some ways the process of curating was quite similar to the process of wood firing:  I had a lot of macro control over the show, but ultimately the end result was dependent on a lot of factors that I could not control.  It was an exciting role to play.

What other area galleries carry your work?

Where is your studio? Is the public welcome to stop by? Or … ?


My studio is in the Clayspace Co-op in the Wedge building in the Riverarts District of Asheville.  We are certainly open to the public, though I won't be around until late November as I have a number of projects that are keeping me out of the studio at this point.

A video about me

Here is a video Chris Gallaway of Horizonline Productions made about me as part of his ongoing documentation of the artists who work in the Riverarts District of Asheville, NC.

Frank caught me working late in the studio one night.  I am honored to have been the subject of a photographer of his caliber. 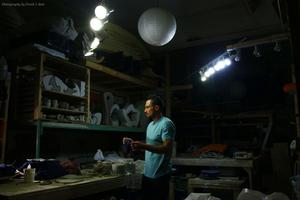 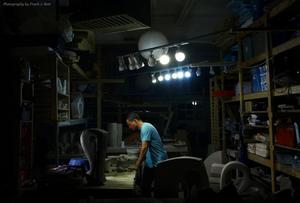