Between Bones and Words. 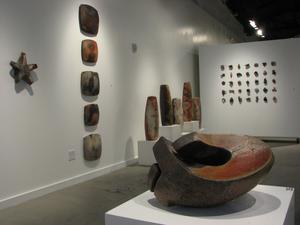 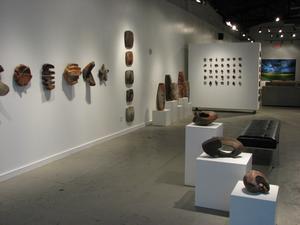 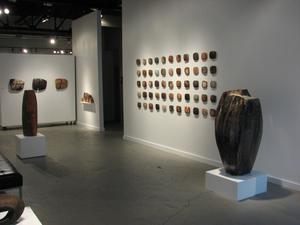 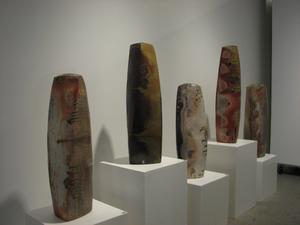 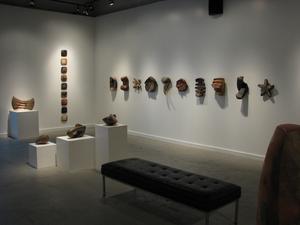 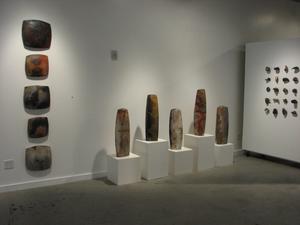 This is an article published in the May issue of Ceramics Monthly.  The PDF appears courtesy of Ceramic Montly.  Please visit their website at www.ceramicsmonthly.org/

Because the text of the article is a bit difficult to read, I have included a text only version below.

My conversations with Eric Knoche began with a fairly straightforward intention: I wanted to understand how the artist’s multiple bodies of work informed and enhanced each other. I had a hunch that each served as a distinct study of formal concepts, and that when viewed as a whole, these bodies of work would reveal Knoche’s style. To a certain extent, that seemed true enough. But perhaps more important was the discovery that Knoche’s bodies of work act as stepping stones for both the artist’s creative process and the viewer’s unique experience.

With hints of influence from the Japanese Bizen tradition, Scandinavian design, and adobe architecture, Knoche currently uses sparse but natural ash glazes across gritty, natural surfaces to make work ranging from hand-held to human-sized. The forms are loosely geometric and often exhibited in multiples, inviting the viewer to touch, arrange, or play with the pieces. Based on his website—which provides images of vessels, platters, sculptures, large works, and installations—I asked the artist if it was accurate to say he produces five bodies of work. “It would be more accurate to generate a mind map with thicker or thinner lines showing the connections between various series,” Knoche said. “To me, it is really one body of work.”

Interestingly enough, it was this connection that mattered more than distinguishing the work into separate bodies. From the outset, Knoche has been a process-oriented artist. In 2004, he apprenticed with New York ceramicist Jeff Shapiro for two years. From 2008-09, he spent half a year in Japan through the Asian Cultural Council apprenticing with Isezaki Jun, a Living National Treasure. “Initially, I was hesitant to subordinate my own creative drives to someone else,” said Knoche. “But I took stock…and I realized that it would be really helpful to see how everything relates. I wanted to learn how the business side and the artistic side interact, how studio life and home life connect, how a professional artist spends their day, minute to minute.” For Knoche, apprenticing was more about how to live like an artist, not how to technically construct something artistic. He came away from both experiences with role models for life. “I was really taken by how involved [Jeff Shapiro’s] whole family was. His wife, for example, doesn’t really make pots, but is a master at firing the wood kiln and an expert chef. I learned a lot from her too.” Likewise, in Japan, Knoche was interested in Isezaki’s process before the actual making.

Knoche’s vessels and platters serve as the first point of connection in his creative process. “I use them to explore special relationships between curves, planes, and angles. They are very grounding for me,” he said. Although made singularly, he almost always displays the pieces in concert with one another, waiting until after a firing to see which forms sit well together depending on surface design and shape. Most vessels stand between eight and sixteen inches high and four to ten inches across, with platters ranging between twenty to thirty inches. When venturing toward a new form entirely, Knoche likes “starting from the place of certainty” that this work affords because of its functionality—the vessels stand upright with an opening to suggest a vase or container and the platters meet the basic criteria. Viewers, likewise, can find an immediate point of connection through this functionality even though the works’ predominate feature is the sculptural shapes rather than the potential physical “use.”

Knoche’s second way of engaging his creative process happens as he constructs what he calls sculptures and larger works. These expand on formal concepts evident in the vessels and platters, but traditional functionality is a distant echo. The sculptures are stackable, puzzle-pieced hollow forms clearly made by the same hand, begging the viewer to step a little further from the comfort zone and into the realm of physical interaction. The pieces of Knoche’s “Arch Puzzles” can be picked up, restacked, or mixed and matched. Works such as “Ribcage” and “Untitled Puzzle” can be aligned to form what looks like one solid form out of three, four, five, or even more separate pieces.

Equally as interactive, Knoche’s larger work is too cumbersome to pick up and move, but still manages to push the viewer out of the comfort zone using the temptation of interaction. “There is something special that happens when forms approach human size. I’m curious about this and…the larger works are a way for me to explore the way my work affects the space around it,” says Knoche. Indeed, what’s affected isn’t just the external space, because the human-sized forms in dance-like postures provide an internal conceptual experience for viewers as well.

Employing all of his explorations—from the vessels and platters, through the sculptures and larger works—Knoche’s affinity for process comes to fruition in the final point of connection to his creative process: installations. Work such as “Aurora” or “Untitled Expansion No. 1” are less about form or size and more about surface and arrangement. “With these, I am exploring how the different surface effects combine in sequences to create something entirely other,” says Knoche. “My hope is that the whole, including the white space, transcends the individual blocks on the wall.”

Like many artists who have apprenticed, Knoche’s early experiences served as a sort of warm-up drill to transition from functioning in basic, survival mode as an artist into full-time, well-rounded studio life that’s ripe with opportunity. What’s interesting, of course, is that the touchstones in Knoche’s creative process build on each other in a similar way—the vessels and platters are functional, the sculptures and larger works push further into unfamiliar territory, and finally the installations are perpetually in flux, always waiting to be arranged and rearranged in an endless run of discoveries.

In 2011, Knoche will spend several months in Australia with ceramicist Ben Richardson. Look for his solo show of new work this May at Crimson Laurel Gallery in North Carolina, and another solo show in October at Anderson O’Brien Fine Art Center in Nebraska.

Katey Schultz is Associate Editor of TRACHODON, a dinosaur of a little magazine. Her freelance essays focus on art and the creative process. Follow her two-year travels across the country at www.thewritinglife2.blogspot.com.